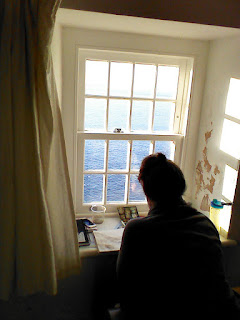 
Arived at Cape Cornwall such a great location with a  wild atmosphere, I had to get outside to look around and drawn the rocks and waves  I used black permanent marker, local mud and vegetation, .  In the evening worked on crochet square thinking of warmth and mothers love.

'The end of 2016 year' with a glass of mulled  none alcohol punch . The smell of cinnamon and cloves moved through the building giving a friendly welcoming aroma to start a new year. Sent off texts to friends and family but in this technology isolation I made a  choice not to wait for replies.

Weather wild and new plans were on the horizon  .We made  trip to lans end and St. Just  I decided to complete my isolation by ditching the transport , I wanted to mindfully slow down absorb this place .

B.V. A great place to meditate and stay calm get in touch with your soul.
In the  studio I developed 10 small abstractions from plain air w/ c sketch of beach. Gathered mud and sea water .  Developed a series of mono prints and painted using acrylic on board Black and White set a recurrent theme of my recent work. Worked from memory.


Monday 2nd Jan 17
Great sunlight we walked to the top of the Perth Ledden  the coast guard  Look out , I did a lone performance practice .
Worked on my theme of black crochet squares did shadow play with the made shadows on rocks and stones in Priest Cove.
Woked on weaving my own hair into a small woven sample. Worked with marbling acrylic inks in studio and had a play with graphite.
Documented all work using smart phone and S L R digital camera.
Performance pre runner ritualised bleaching of  crochet black squares at  midnight under the moon light. 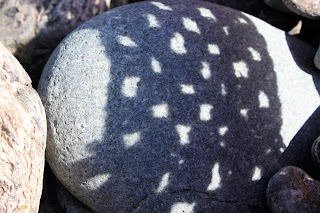 Shaddow on a Stone at Priest Cove

A beautiful day with  crystal clear light and no wind .
Experiment bleaching  of black squares failed , decided to cover in wax and burn at midnight as a performance process.


Around Midnight we went outside and  identified star consolations Orian,The Great Bear the North Star and the milky way. The moon wax waxing in the firs quarter, . Lit a tea light , swung my  acrylic wool square into the flame it exploded into flames. Took Video to be edited later.

Very mild silver grey day went down to the cove mid morning to film performance of gravel brushing . The tide was full and turning in the cove and no one about.
I performed the gravel brushing with a broom and made a small Bronze Age shaped long barrow miniature structure.

Filmed Anointing a Rock
https://vimeo.com/200337181
I then performed a ritualised collection of sea water and 'water anointing' of a rock . It reminded of a child hood memorie pretend painting with water on a old coal bunker we had in the garden of my parents house the bunker was made of cement and got discoloured as you painted it with water.
Miriam kindly assisted and filmed .

Up early watched the day light arrive silver day very windy and their was a extra high tide .  . Reviewed further plans for development with Miriam the book layout and wax modelling collaboration for the future.
Their was a gale force 9 wind today.

Diane Roberts
Posted by Unknown at 08:55 No comments:

During our residency there was
a new moon and clear skies.

The  remote  location  enabled
us to stargaze without the
interference of extraneous light
usually experienced in the town. 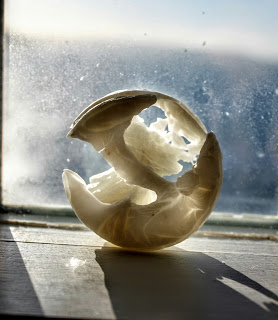 Global Transience.
Wax maquette formed from the action of ice.

In addition to our individual concerns we were inspired


to discuss the possibility of a collaborative project:

An installation highlighting the issue of light pollution

which impacts on bird migration, contributes to global 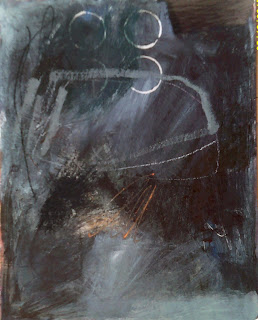 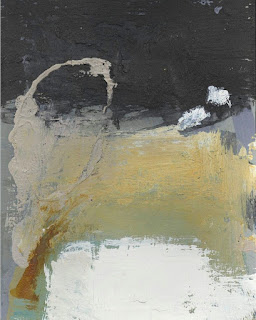 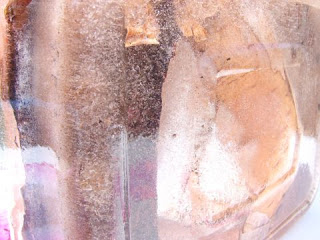 Our intention is to document the artist residency process by
means of this blog and a limited edition artist's book.
Our first meeting was in late November 2015 when we discussed
practicalities, our reasons for applying, possible outcomes and the
tradition of the artist's retreat. The shared purpose and interaction
would give us the opportunity to discuss in depth and evaluate our
individual art practices and possible future collaborations. Seeing
another artist's work in progress along with their concerns and
preoccupations is stimulating and often thought provoking. 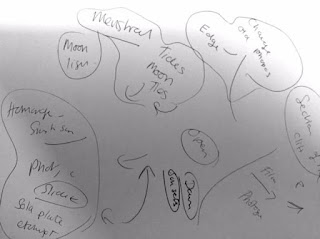 Water Works
We have imposed the theme of Water .Water used as a tool: effecting a
change such as erosion: a medium:  influence and subject matter.

'My approach is to arrive with no preconceptions and become immersed in the new landscape relying on serendipity,  possibly incorporating materials that bring their own history. Seeking this self-imposed restriction ensures dependency on responding to the unfamiliar environment. This improvisational way of working appeals to me as it subverts familiar methods, like learning a new language.'

'In our first discussions our ideas were played out like a tennis match one idea
matching the other. Delving deeper into our imaginations and creative, unique and
shared histories.I want to discuss collaborative art practice with Miriam .The
residency will give us the opportunity to get away. All the routine distractions of
everyday life will be far away. Living in a none familiar area on neutral territory
we can start new beginnings previous work evaluated, eliminated or integrated
and put to one side.'